Protect yourself from Ransomware - some common sense rules


There has been a national increase in a type of Cyber Security Incident that you need to know about. Ransomware is a type of computer malware that encrypts a users’ data files and demands a monetary payment to decrypt them.

Why this is bad?

What should I do about it?

Act immediately if you think you are a victim

If you notice this behavior on your workstation...
Please direct any questions or concerns to the SHC IT Helpdesk at 251.380.2276 or helpdesk@shc.edu
Posted by Unknown at 10:00 AM No comments:

As of September 1, 2015, Google Chrome will stop supporting an older version of the plug-in architecture known as NPAPI.

The following are the most popular NPAPI plug-ins used in Google Chrome:

The adoption rate of these plug-ins has dropped over the years, so it is unlikely you will be affected. If you find that a Website you visit stops working, try using another browser such as Firefox until the sites move away from using the deprecated, and potentially insecure NPAPI architecture.

More information is available on the Official Chromium Blog. http://blog.chromium.org/2014/11/the-final-countdown-for-npapi.html
Posted by Unknown at 9:42 AM No comments:

Stop showing up early for meetings! Fix your calendar timezone.

Have you showed up for a meeting an hour early since the time change on March 8? If so, you may have never set the proper timezone in your Google Calendar.

Here's how to do it: 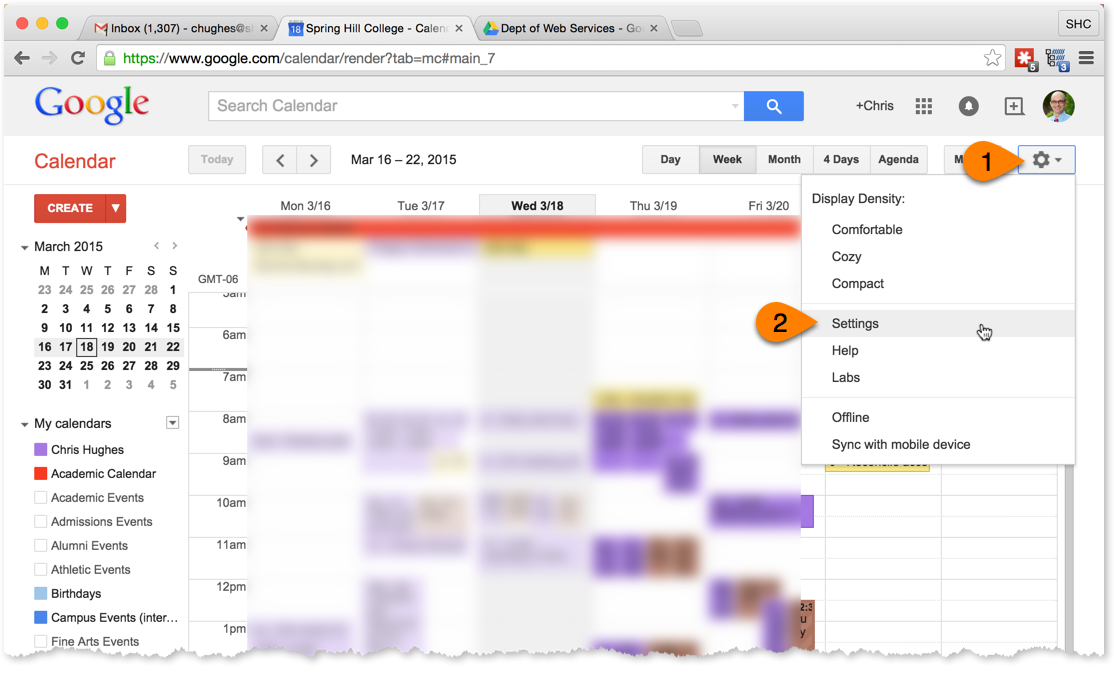 From the Settings menu (1) select Settings(2). 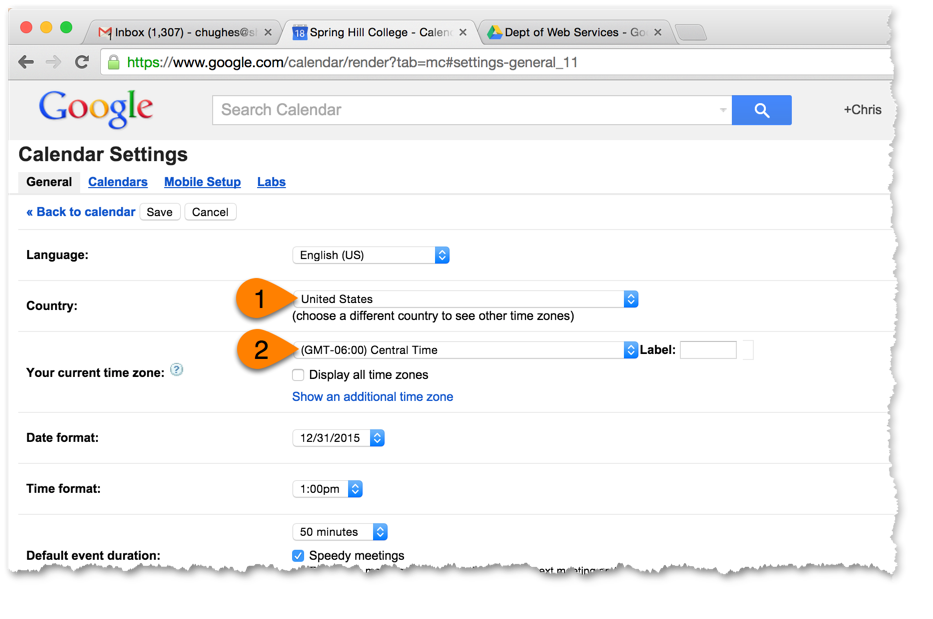 All done. Enjoy your extra hour of sleep.

Posted by Unknown at 3:04 PM No comments:

Getting started with SHC email

Spring Hill College uses Google Apps for Education to provide email and other services to our campus users. If you've never used Gmail, here's a quick screencast to guide you through the login process.

Adding an image to your Gmail signature

Here's a quick video tutorial on how to add a signature image to your SHC Gmail account.

You can copy/paste the logo image URL from here:
http://www.shc.edu/media/common/logo/shclogo.png

Posted by Unknown at 9:43 AM No comments:

If you send a lot of calendar invitations, especially for events with a lot of attendees, you may get tired of deleting the emails you get back when someone responds to your meeting invitation.

It's fairly easy to set up a filter in Gmail that will take those response emails out of your inbox, or delete them altogether.

What the heck are Labels in Gmail and why should I care?

The great thing about labels is you can use them exactly like folders, but why would you want to? Labels are much more flexible and offer some distinct advantages to the antiquated notion of folders.